In the future, artists fear that they will be replaced by artificial intelligence. They worry that machines will be able to create better art than them and that their jobs will be taken away. However, they also see the potential for AI to help them create new and innovative art.

As an artist, I’ve always been aware of the threat of artificial intelligence. It’s always been in the back of my mind, lurking like a dark cloud. Now, it seems, that cloud is getting closer and closer. I see the headlines about how AI is being used to create art, and it’s only a matter of time before it’s good enough to replace humans.

END_OF_DOCUMENT_TOKEN_TO_BE_REPLACED 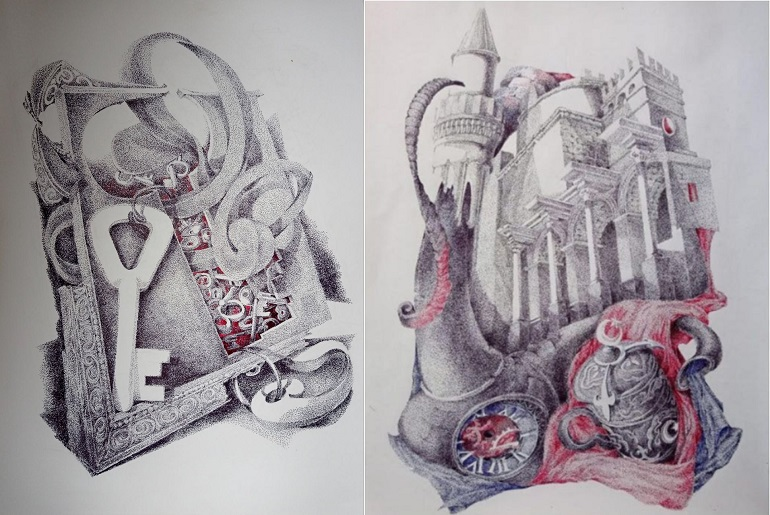 Marat Myrzakhmetov is an artist who has a very unusual style of drawing with a pen. His drawings are incredibly detailed and realistic, but at the same time there is some unearthly quality to them. As if Marat is able to convey in his drawings the essence of his objects, not just their appearance.

Marat’s drawings are capable of striking the imagination and making the viewer feel that he is looking at something otherworldly.

END_OF_DOCUMENT_TOKEN_TO_BE_REPLACED

01.10.2022 Maria Bregman is a journalist, writer and contemporary art researcher.

As through millions of light years, we can see the glow of stars that have long been extinguished, so from the depths of the Renaissance, we can feel the sights and emotions of people who lived once, thanks to portrait painting. The paintings of Anthony van Dyck, Diego Velázquez, Rembrandt Van Rijn amaze us with their great works and fix our eyes on the personalities of that time.

Artistic portraiture has always been in demand among the English aristocracy. Joshua Reynolds, who was the President of the Royal Academy of Arts and though he always considered himself a landscape painter, he is remembered in history and found fame as a portrait painter who showed us the faces and inner worlds of his heroes.

As an art researcher, I am always on the lookout for new and interesting artists who push the boundaries of creative expression. When I was introduced to Evgeny Grouzdev’s work, I was immediately struck by his unique approach to portraiture. His use of light and shadow to create a sense of drama is unlike anything I had seen before.

END_OF_DOCUMENT_TOKEN_TO_BE_REPLACED

Artists, musicians, writers, and performers in Ireland now receive a weekly ‘basic income’ of €325 ($329) from the Irish government.Originally announced in January 2022, the Basic Income for Artists plan is still in the works. Approximately €25 million ($23.3 million) will be spent on the initiative by the Minister for Culture and Arts. The program received over 9,000 applications, with 2,000 chosen. A random selection of participants was conducted to select those who would participate in the program. Most recipients will receive a three-year stipend, according to the BBC.The Irish Minister for Tourism, Culture, Arts, Gaeltacht, Sports and Media, Catherine Martin, set up the basic income initiative for those working in the arts.Several ways were suggested by the task force to help the arts recovery from the effects of the pandemic. It is a condition of joining the program that you participate in a research project to find out how the payments have been impacting the economy.

END_OF_DOCUMENT_TOKEN_TO_BE_REPLACED

6.09.2022 Maria Bregman is a journalist, writer and contemporary art researcher.

In our shimmering, colourful world, the illusory strokes put us into a state of spirituality and flight shaping works of contemporary artists, designers, ceramicists and photographers.

END_OF_DOCUMENT_TOKEN_TO_BE_REPLACED

The guest of the club was the talent writer Maria Bregman. During her reading in the Queen Mary Garden, she read excerpts from her new book “Merging with Light” and discussed her characters and plots with readers who attended. There was a lot of interest among readers in meeting the author, learning more about her work, and getting to know her.

Audience members were given a peek behind the scenes of the creative process as the writers discussed life, poetry and prose.

During the event, no seat was empty: people from all walks of life were eager to hear their favorite authors read from their latest works.

During the meeting, writers signed books and talked to everyone in the audience despite their busy schedules. After the readings, the writers answered readers’ questions and discussed literature and reading in today’s society. Authors were available to speak with the audience. Everyone who was there had an interesting experience, making London the literary capital of the world and a true testament to the quality of writing in the city.

A real celebration of literature took place at the Literary Meetings in London.

London’s Glagol literary club will continue to hold its Literary Meetings, which are so popular with readers of all ages.

There is something for everyone at the Literary Meetings, whether you are a reader or not. Get ready for the Queen Mary Rose Gardens next month and mark the date in your diary.

The cafe chain pulls plug on annual literature prizes, and there are no plans for it to be taken over by a new sponsor

The Costa Book Awards have been dissolved after 50 years, as organisers refuse to seek another sponsor.

Established in 1971 as the Whitbread Book Awards, the prize, celebrating literary works popular with the reading public, has been sponsored by cafe chain Costa since 2006.

The company has announced that it has ended the Costa Book Awards, and that “there are currently no plans for it to be taken over” by another sponsor, effectively dissolving the 50-year-old prize.

Costa has also said that there are no plans to revive the awards, which have promoted popular fiction, poetry, and biography, and steered the literary market in the UK.

Hands up who was expecting a question about Lady Macbeth…

Well, that’s the second English Literature paper finished. So, how did everyone find it?

Shoulders left some students feeling all choked up, and Macbeth’s fears were harder to pinpoint than Rome’s love.

The Literature GCSE offers learners the opportunity to read, interpret, evaluate and respond to a range of literature in English.

The yearly celebration of Manchester’s libraries is back, for its second year, with approximately 100 free events across Greater Manchester that will take place from 15 June to 19 June.

The Festival of Libraries programme this year will take place in internationally renowned institutions from Manchester’s rich tapestry of heritage libraries, including Central Library, with its impressive status as the busiest public library in the country, in addition to Chetham’s, The Portico, and John Ryland’s and Manchester Poetry Library.

In tandem with this, Family Fun Days are taking place on Saturday 18 June in Forum Library, Longsight Library and North City Library. On 19 June, to coincide with Manchester Day, there will be a See Myself in Books Sunday Funday at Manchester Central Library. See Myself in Books is an initiative launched by Read Manchester and Manchester City Council to increase the diversity of children’s literature and to ensure characters come from a wide range of backgrounds.

Starting this week, PKF is hosting The Write Circle series of events with Abhigyan Prakash and Barkha Dutt to connect Indian authors with a select audience in some of the cities in UK.

“We are very happy to be back with live in-person events. Though virtual events have their benefits, physical events have their own charm as it builds memorable connections and treasured moments between the author/artiste and the audience,” said Sundeep Bhutoria, Managing Trustee, Prabha Khaitan Foundation.